In the first phase we trained students of (2014 – 2017) batch and outsiders including alumnae of our college. Totally 134 students attended the training and 37 students appeared for the November 2016 Group IV Examination.

A total of 30 students enrolled for the SSC Examination Training program. The coaching classes by Explore Academy, Coimbatore commenced on 28th of January 2017. A 75 hours of training was provided.

Recommendations were given to enhance the Training program

3. Trainer for the Training:

26 Students of this batch 2017-2018 have registered for the forthcoming TNPSC VAO Exam.

Staff Selection Commission or SSC has been one of the most desirable organizations for Government exams in India. Every year thousands of vacancies are filled by SSC in Government departments. Govt. jobs are the most sought after career choice in India. More so, the government is focusing on providing better facilities and services in every aspect of our lives. Government is focusing on the development of our country and to do that millions of Jobs will be created in the coming years. SSC is the leading Govt. organization that provides employment to lakhs of students in India. A great opportunity lies ahead for all the SSC aspirants. Notification was released on 18thof November 2017.

For the above SSC Combined Higher Secondary Level (CHSL, 10+2) examination 16 students have applied and are being trained.

Measures taken to improve students’ performance and to make them prepare well for the Examination:

In order to make students more efficient to attend their forthcoming examination. Trainers from different academy have been appointed and students are being trained. 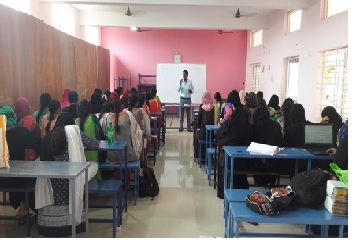